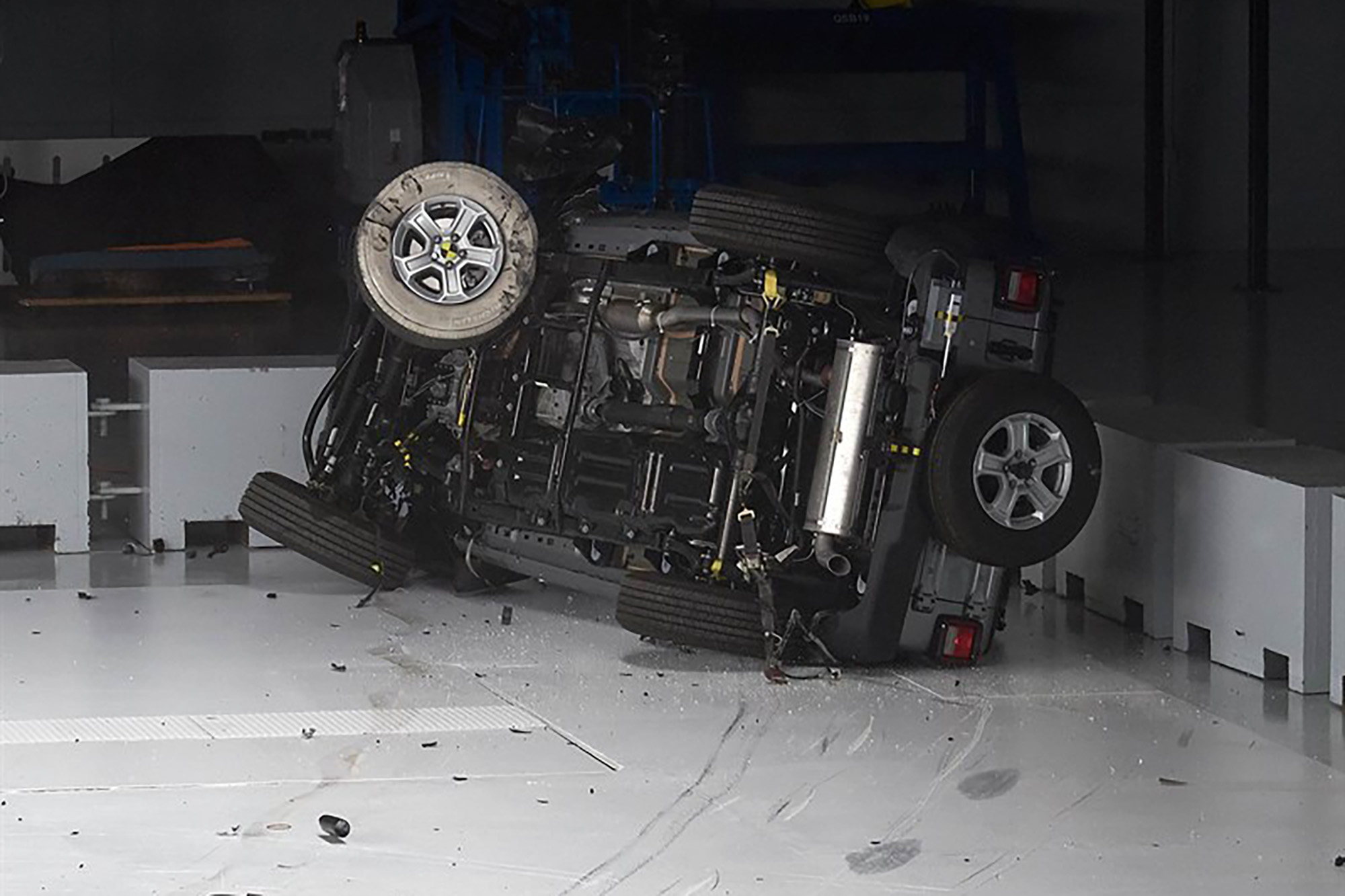 The Jeep Wrangler has never been known for its overwhelming claims to safety and protection, but a new test performed by the Insurance Institute for Highway Safety may send some Jeep engineers scrambling for an explanation. In a recent crashworthiness evaluation of the 2019 Wrangler, which was redesigned for the 2018 model year, IIHS reports that the vehicle flipped onto its side during one of the tests.

Related: 2020 Jeep Wrangler: Everything You Need to Know

During the driver-side small overlap front crash test, a partial-offset test in which the vehicle is run into a barrier that only collides with part of the front end, simulating, for example, when a driver strikes the corner of an oncoming vehicle with the corner of their own. Three separate tests were run, according to a press release by IIHS: one performed by Fiat Chrysler Automobiles (parent company of Jeep brand), and two by the insurance-industry-backed auto-safety advocacy organization. The FCA test did not result in a rollover, while both IIHS tests did. The second IIHS test was performed at FCA’s request, in response to the automaker’s questions about how the Jeep being tested was mounted to the propulsion apparatus that moves the SUV. Even after changing to a new affixation point, the result was the same.

When the Jeep was righted onto its wheels, IIHS said that the result of the test was actually good — the crash with the barrier saw the driver’s space remain well maintained, protecting the driver with well-controlled movement of the crash-test dummy. But the result of the vehicle flipping onto its side from a frontal impact is unacceptable and out of scope of the injuries measurable by the test, says IIHS, resulting in an overall “marginal” rating. This becomes especially troubling as the Wrangler is designed with a removable roof and doors, making passenger ejection of particular concern in a rollover. The Wrangler does not have overhead side curtain airbags designed to help prevent ejection of the vehicle occupants, as it’s basically a convertible with a roll cage.

The rollover is unfortunate, as the Wrangler fared otherwise pretty well in the battery of tests IIHS performed. It earned a rating of good in the moderate overlap front, side, roof and head restraint evaluations, and its optional autonomous emergency braking system successfully avoided collisions at 12 and 25 mph, earning a rating of superior. The headlights, long a Wrangler failing, still earned a poor rating in the latest model, both for the base halogen and upgraded premium LED models. The overall results qualified the off-road icon for neither IIHS’ Top Safety Pick nor highest Top Safety Pick Plus honor.

The automaker defended the Wrangler in a statement: “FCA has produced more than 500,000 of these vehicles. By conservative estimate, they have accounted for 6.7 billion miles of on-road driving. From this population, we are unaware of any incidents that correlate to the vehicle dynamic portion of the IIHS test result. With more than 75 available safety and security features, the Jeep Wrangler Unlimited meets or exceeds all federal safety standards and continues to win acclaim from news organizations and consumer groups. Since its 2017 introduction, the vehicle has earned one award nearly every eight weeks for attributes ranging from capability to residual value, and for achievements such as highest customer loyalty and SUV of the year. No single test determines vehicle safety. FCA routinely monitors third-party evaluations and factors such findings into our product-development process. We design our vehicles for real-world performance. And real-world data, along with continuing demand, indicate the Jeep Wrangler Unlimited meets or exceeds customer expectations.”