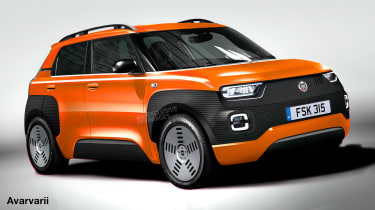 An all-new Fiat Panda is set to arrive by the start of 2022, joining an all-electric 500 in the Fiat line-up and helping to kickstart a major recovery by the Italian manufacturer in some of the family car market sectors that it helped to invent.

After years of under-investment in the Italian brand, as Fiat Chrysler Automobiles (FCA) focused on its more profitable Jeep brand, Fiat is poised to rapidly expand its line-up through the first half of this decade. This process will start with the production version of the Centoventi concept that was revealed at last year’s Geneva Motor Show. Boss Olivier François says ruthless focus on cost will be at the heart of the new model’s creation – just as it was with the original Panda back in 1980.

That means key concept elements, such as a very limited range of colours but personalisation through optional wraps, and chunky plastic rubbing strips to protect against urban scrapes, are likely to be retained. Our images here show how the vehicle could be translated into production.

Speaking exclusively to Auto Express, François, Fiat Brand Global and chief marketing officer, declared his intention to maintain the Panda name and ethos: “There will be a future for Panda as a name plate,” he said. “That’s why I pitched the latest 500 initially as a convertible: high-end, full of options and 30,000 Euros. Because the day I introduce the future Panda, I’ll probably do the opposite. I’ll introduce the most naked version with an incredible price.

“So yes, I badly want a future for the Panda, because I think this is what makes Fiat so unique. There is no Fiat as a whole if you don’t have a Panda and a 500.”

The Panda is likely to become the first Fiat model to use components sourced from PSA – the group that includes Peugeot and Citroen – assuming the proposed merger between the French company and FCA is completed in early 2021. 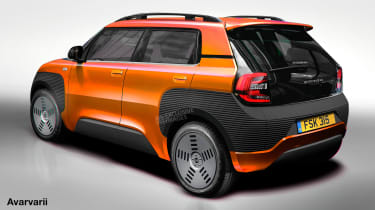 PSA’s CMP small-car platform can be powered by petrol, diesel and pure-electric configurations – and this flexibility, coupled with the cost savings through sharing parts across a large number of other models, would make it an ideal choice for Fiat as the brand tries to overhaul its smaller vehicles.

François declined to comment on specific PSA-related plans, because the deal is still going through legal approval. But he expressed his personal enthusiasm at the possibilities the arrangement could bring.

“The Panda is one of the first things I’m looking forward to sharing,” he said. “What inspired the Centoventi in the first place was me looking at the Citroen C4 Cactus – long before we were even talking with PSA.

“I will say that I am looking forward to continuing the conversation about the concept in the new set-up, whenever this will happen – not just because of the additional opportunities that can come, but also to pick other people’s brains and see how this resonates with another European mainstream car maker. Obviously, when I speak about the Panda and Centoventi with my American colleagues at Dodge or Jeep, it’s relatively remote. Clearly the PSA merger would be a chance for me to have some ‘partners in crime’ who think the same way.”

Rumours have suggested that the new Panda will be based on the latest 500’s all-electric platform. But François said that the approach to the Mk4 model will be so cost-focused that it may need to have a conventionally powered version. Diesel seems unlikely, but the entry point could make use of PSA’s 1.2-litre, non-turbo PureTech petrol engine, or the latest Fiat TwinAir with mild electrification.

“The idea is to have a full electric vehicle at the price of a combustion-engined car,” he said. “If we can do that, it’s totally true to the Panda’s mission. If we can’t, we’ll probably need an internal-combustion engine (ICE) – maybe a mild hybrid – and a full electric. That EV can still be democratic but okay, at an attractive price for an electric car – maybe just not at the price I was envisioning. We’re working on that. It’s not easy.”

The current Panda is manufactured at Pomigliano near Naples. Post-PSA merger, it’s conceivable that the current site would merit investment to be switched over to CMP production, potentially manufacturing not only the Panda but also an all-new Punto supermini that could use much of the same underpinnings and powertrains.

Click here for our Inside Fiat Chrysler Automobiles special…